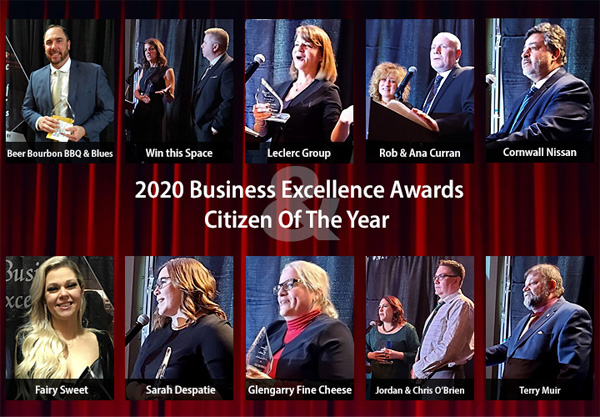 Cornwall Ontario – Community and business leaders gathered together this weekend at the Cornwall Civic Complex for the 32nd Annual Business Excellence Awards put on by the Cornwall Chamber of Commerce.

The Business Excellence Awards recognizes and celebrates companies who have distinguished themselves by fostering growth, innovation, community service and excellence in their sectors. The winners are chosen by a committee of peers who evaluate nominations received from the community.

“This year’s business winners are a reflection of the strength and diversity of the Cornwall business community,” said Shannon Lebrun, Chamber President.

Tourism Excellence
Ian Bentley and his team were recognized for the ongoing success of the Beer Bourbon BBQ & Blues festival which attracts thousands to grounds of the NAV CENTRE each summer. This year’s show takes place July 11.

The awards gala was not only about business excellence however.

Citizen of the Year
Terry Muir was named 2019 Citizen of the Year. A well-known and tenacious volunteer in Cornwall, Mr. Muir has helped organized a number of positive community events, most notably Ribfest, which attracts thousands to Lamoureux Park each August.

You can learn more about the Business Excellence and Citizen of the Year Awards, including past winners, on the Chamber’s website.

About the Chamber of Commerce

The Cornwall and Area Chamber of Commerce is the unified voice of the region’s business community speaking towards growth, leadership and innovation. With direction from the elected board of directors, the Chamber looks to continuously progress the community through political advocacy, knowledge-based development and innovative opportunities.

The Chamber has close to 700 members. For more information, please click on the following links: